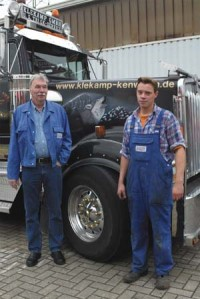 adress in the usa

Anyone having anything to do with American trucks in Germany will know the name Klekamp for sure. Willi Klekamp is a well known and colorful character who, through his regular trips stateside, is able to offer products making even the coolest trucker go weak at the kneesHow it all beganIn 1959 Willi Klekamp started an apprenticeship as a motor mechanic working for the company MAN in Osnabrück which is in Lower Saxony, Germany. After successfully completing his apprenticeship, Willi worked as a mechanic in his father’s workshop. Later the Klekamp’s started up a haulage company and began transporting goods throughout the whole of mainland Europe as well as Scandinavia.In 1989 Willi decided to use the extensive contacts he had in the US to expand his business and establish a truck dealership specializing in the sale of American trucks – in particular Kenworth, Freightliner, Peterbilt and Mack. Over the past twenty years or so, Klekamp Nutzfahrzeuge GmbH has gone from strength to strength in establishing itself within Germany and Europe as the experts when it comes to US trucks. To reinforce this Klekamp Nutzfahrzeuge GmbH has also managed to become an authorized dealer for Freightliner, Western Star and Detroit Diesel in Germany and Europe.

The developmentThere are probably very few US trucks on the German roads that Willi Klekamp doesn’t know – mainly because he has, at one time or another, order spare parts for them or worked on them himself.Willi is always willing to give advice and tips whether it concerns problems with vehicle inspections, the procurement of spare parts or anything else to do with US trucks. Put simply, Willi’s many years of experience dealing with US trucks means that he has the answer to any problems which may raise their heads.It is common knowledge that when a Kenworth, Peterbilt, Mack, Freightliner or Western Star arrives after the long journey from the US at the Klekamp Nutzfahrzeuge GmbH workshop in Hasbergen-Gaste, Germany it won’t be long until the truck is made street legal and leaves the workshop with a happy new owner at the wheel. Klekamp trucks are fitted-out as standard with many features which the normal German trucker would regard as extras: most US trucks have coffee machines, microwaves, fridges and televisions already on-board. But this isn’t all – the truck can also be modified to meet the customer unique wishes. On a number of occasions, customers have wanted an onboard shower unit within the cab – even this is no problem for the Klekamps.

The WorkshopThe workshop is fitted out with the some of the most modern equipment available on the market today which means that, for example, problems can be detected with trucks powered by Caterpillar, Cummins and Detroit engines by attaching them to laptops fitted with special software – something no other German workshop can do! Furthermore, a state of the art brake test machine is another one of the many machines which enable Klekamp to provide top class service.If after checking out the truck it turns out that a part is broken then a replacement part is, if not already in our comprehensive store, ordered immediately from our suppliers in the US. This means that within two to three working days the part is in Hasbergen-Gaste and ready to be fitted.

FurtherKlekamp does things the old German way – where Made in Germany means quality of the highest standard. If a chassis is shortened and then needs to be inspected by the TÜV (Technical Inspection Agency) then Willi and his son Markus make sure every safety aspect is covered. For example, if a fitting requires six screws then the Klekamps use at least four more, if extra metal needs to be welded onto the chassis then, out of principle, Klekamps use a thickness which exceeds that required by the TÜV. The end result of this Klekamp philosophy can be seen on Germany’s roads every day when one sees trucks belonging to Sinalco, Jägermeister, Haribo or perhaps most recognizable of all the Christmas trucks belonging to Coca Cola. Naturally, when Willi and Markus do find the time to attend national and international truck meetings they are inundated with questions about their creations.

Detroit Diesel - Powerful engines and an efficient distribution networkWe are official distributors of Detroit Diesel in Germany. We can not only supply you with Freightliner and Western Star trucks with Detroit Diesel engines but we are also able to obtain spare parts and repair these trucks in our workshop.